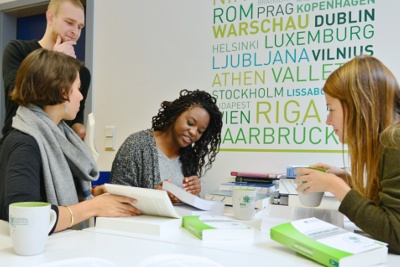 Language of tuition
English or German

Length of course
One year (2 semesters)


Cost / fees
The tuition fee is 5,600 EUR per academic year (2,800 EUR per semester). An additional administrative fee is payable to Saarland University. Payment of this fee entitles students to an ID-Card, which authorizes free use of public transportation within the Saarland, and accident insurance. Costs of living is about 650 EUR per month.


Accommodation
The Europa-Institut assists students with finding accommodation. The options range from studio apartments (most popular) to shared housing and student halls.


Major recruiters of graduates of our programmes
More than 5,000 students from all over the world have successfully graduated from the program and now hold positions in European and international organizations, internationally oriented law firms, international companies as well as in national governments and administrations. Via our alumni association EVER e.V. we are in regular contact with alumni all over the world.

Exchange partner schools
The annual simulation of European decision-making processes (EUROSIM) is held in cooperation with a consortium of universities from the State of New York and Europe. Also, we organize spring schools with Fordham University, New York, USA and Regent´s University London (selection process).


Admission requirements
The requirements for admission to the LL.M. program "European and International Law" at the Europa-Institut are as follows:
• a university degree in law or in a comparable subject (business studies, humanities) from a German or foreign university and
• proof of sound knowledge of German and/or English

LL.M. in European and International Law

The Europa-Institut offers the following modules: Each unit offers a high degree of specialization in quickly expanding professional fields within European and international law.

Module 1 focuses on the basics and foundations of European law. Aside from the more classical fields, lectures will also cover subjects such as European Private Law, and the EU Common Foreign and Security Policy, in order to provide students with a basic understanding of and an insight into the legal inter-connectedness of the European Union and its institutions. Through a variety of practical simulation courses, such as the ECJ Moot Court or EuroSim, students are able to put their acquired theoretical knowledge into practice.

The study unit comprises various areas of law which are of fundamental importance not only in Europe but in a global perspective, with regard to both economic and legal practice. The courses convey sound knowledge of the general framework that characterizes economic activity in the European Union (the Economic and Monetary Union, Banking Law and European Tax Law). Students may also deepen their knowledge of more particular regulations which economic activities in the EU might be subject to (e.g. European Competition Law, Economic and Competition Policy) or that potentially accompany such activities (e.g. Intellectual Property Law). The challenges of economic globalization are taken into account in courses in which the subject matter extends beyond EU borders. In addition, there are numerous case studies offered as part of the study unit which allow students to put their theoretical knowledge into practice. Moreover, students have the opportunity to focus on European Management.

The study unit deals with economic globalization especially in the areas of trade, investment and capital transactions. Courses such as International Trade, Investment and Raw Materials Law and further selected parts of International Economic Law convey essential knowledge of key material in International Economic Law. Special attention is given to the interplay between economics and law, a relationship that is becoming increasingly important in both international and European legal practice. Courses that delve more deeply into the subject matter include lectures based on the Foreign Trade Law of the European Union and its member states, substantive WTO Law (particularly focusing on the GATT, the GATS and the TRIPS Agreement) and the harmonization of national trade laws. Certain courses are centered on legal areas that are becoming increasingly more important as a result of increased international trade (such as laws relating to financial supervision). In addition, courses on international economic and monetary policy as well as on international economic sanctions laws are offered.

The study unit International Dispute Resolution familiarizes students with typical problems and the basic concepts of international commercial arbitration, international investment arbitration and alternative dispute resolution. The aim of the study unit is to focus on efficient and fair dispute resolution in a transnational context, in a world where commercial courts are national institutions. This study unit offers, in addition to the named lecture topics, complementing lectures for increased understanding and insight, for instance in “International Business Transactions”, a lecture focusing on students acquiring specialized expertise as well as insight into the many cultural perspectives and aspects relevant to doing business across borders, in order for students to get an enhanced understanding of the complexity of cross-border trade. Case studies, negotiation and procedural training are an important part of the study unit and provide an ideal addition to the lectures on offer. This enables students to obtain an ideal mix of theoretically minded lectures, equipping students with the necessary analytical abilities, and more practically applicable courses, allowing students to put their acquired theoretical knowledge into practice. Distinguished guest lecturers form an integral part of the program. Furthermore, excursions to international institutions (such as the ICC in Paris) are on the agenda.

Participants in this study unit will focus on the main features, limits and developments in human rights protection and will be shown how to put this knowledge successfully into practice. The study unit deals with the development and realization of human rights in public international law and in international treaties on a global level as well as on a regional European level and their respective interrelations. Moreover, the study unit focuses on the relationship between the European Union and the European Convention on Human Rights as well as on the practice of the bodies of the United Nations, the European Court of Justice, the European Court of Human Rights and the Council of Europe. The practical application of human rights law is of particular relevance and interest for the purposes of this study unit. The courses cover both past and pending case law which addresses current issues. But it is also about more general questions such as those relating to the rights of individuals in relation to the sovereignty of the European Union and moreover to the point on how and whether the “neverending story” of an accession of the European Union to the European Convention on Human Rights can be brought to a successful conclusion.

The Master's program in European and International Law at the Europa-Institut will offer a focus on IT Law starting in the winter semester 2019/2020. In addition to the main areas of European Commercial Law, Foreign Trade and Investment Law, International Dispute Resolution and European and International Human Rights Protection, students can now also further their education in this area in the Master's program. The study unit will initially only include German lectures and will focus on the following contents:

The requirements for admission to the LL.M. program "European and International Law" at the Europa-Institut are as follows: More information on www.europainstitut.de/application

The number of available places is limited. Candidates are selected on the basis of their academic qualifications and suitability.

An additional administrative fee is payable to Saarland University. This entitles students to an ID-Card, which authorizes free use of public transportation within the Saarland and accident insurance. In addition, it confirms student status and can therefore be used to obtain student discounts.

The Europa-Institut offers an online application that can be found here: www.europainstitut.de/onlineapplication

Saarland University is a modern university within the Saar-Lor-Lux region - a dynamic part of Europe defined by the shared borders between Germany, France and Luxembourg. An international perspective has been a defining feature of Saarland University ever since it was established in cooperation with France in 1948. Today, 18.500 young people study in Saarbrücken and Homburg (faculty of medicine), 17 per cent of whom are international students. Located in a pleasant woodland setting, the university campus offers students and researchers a broad range of sporting and cultural activities, which together with the numerous cafés and restaurants make the campus an ideal place to relax between lectures or after work. And thanks to the high-speed ICE train link it takes only two hours to travel from Saarbrücken to Paris.